A few weeks ago, we received a call from the principal letting us know that the bus monitor had submitted a report concerning our monkey. According to the report, my son pulled the monitor’s hair, hit her, and threw his cereal at her. She also said she had a small scratch on her face and she had to go get checked out.

We know our son. We know what he’s capable of because of our past experiences. We also know that most of the time, these behaviors are due to something that happened,some sort of trigger.

I asked his teacher how he did that day at school and she said he had a great day. Which confused me. If he was aggressive in the bus why would he go on and have a good day at school? What could have caused it? Typically these type of behaviors tend to follow him throughout the day.

We wanted to see if we could find out . Musband left a message to the transportation department to try to figure this out. I sent a detailed email to the principal and the transportation director as well. In my email I was asking to see if we could see the video. What I wanted to see was what exactly happened to make my son have this type of behavior when he’s been having great days at school (for the most part). He has not had a single issue on the bus since school started. On the contrary, he gets so excited in the mornings when he sees the bus pull up to out house.

I also wanted to deal with this thru a different approach. I wanted to show them who my son is. I wanted them to not see just not an additional child that they pick up every morning. I wanted them to understand that my son has special needs (like the rest of the kids) which are unique to him. I was hoping we could come to some understanding of ways to assist him and his transition to school. We feel transitioning to school is very important because it sets the mood for the rest of the day. If he has a good ride to school, then most likely he’ll have a good day.

We met with the transportation director and the transportation coordinator at the main office this past Friday afternoon. We assumed we would be talking about my monkey’s aggressive behavior. But the first thing the director wanted to do was to show us the video. He said he didn’t want to start the discussion until we saw the video in it’s entirety. He had to blur the other kids’ faces for confidential purposes.

And what we saw was extremely heartbreaking.

In the video, you see my son very happy on his way to school. He’s excited, and it looks like it’s a good morning.

And what does she do?

She starts screaming at him. She starts telling him that he’s not a good boy, that this is the reason why he doesn’t have friends, and she calls him a tonto. (Spanish word for stupid). And she gets louder, and louder.

By this time her negative energy transfers to him. He gets upset. He starts hitting his head. As he is doing this, as he is crying and hitting his head, she just watches him. According to CPI training (crisis prevention), you are to stop the student from hurting others and themselves.

And she just watched.

By this time, he starts to try to get out of his car seat. He’ struggling to do this. He realizes that he can get out of the car seat by going down towards the floor. He’s trying to get away from her.

She gives him something, I’m not sure what it is, her lame effort to get him to calm down. She forces this at him in a way of saying, here look at this, distract yourself.

But by then he is in full melt down mode. He throws it on the floor, he’s just too upset. He’s still crying, hitting his head. When she reaches down to pick up whatever he threw, he lunged at her. He pulled her hair. To this, she grabs his hands, screams at him, telling him not to hit, tells him he’s not allowed to do that. Of course it just escalates from there.

And all of this started because he wanted to hold her hand.

And it just broke my heart.

When I first saw the report, I felt very bad for the monitor. I know how my son gets and how difficult it is to try to calm him when he’s in this type of meltdown.

However, this report was a one-sided report. I only read what she said. She said he hit her, she said he pulled her hair, and she has a scratch on her face. Which are all true. But she doesn’t mention how he got there. What she did to not only initiate this behavior but also added to the fire? She could have gotten up and moved to another seat as opposed to keep telling him ‘no’ when he tried to hold her hand. She could have talked to him in a calm voice as opposed to throw her frustrations at him.

What’s so difficult for us is to get his side of the story because he’s unable to tell us.

My husband and I have an action plan. We will be meeting with the new monitor and driver to discuss my son, to help them understand his unique needs. We are also going to file a complaint against the monitor. And last we are going to ask to amend the report that she originally filed to have a more accurate description of what happened that day.

And as I’m writing this outside our house, a few days later, my heart is broken again. And I’m in tears.

The monkey is jumping on his trampoline. He notices that I’m saad, he stops jumping, climbs out of his trampoline, and runs towards me to hug me.

Yes my monkey, your kisses and hugs always cure my sadness. ❤️ 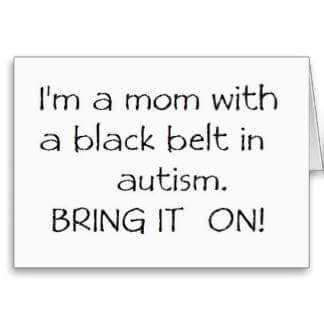