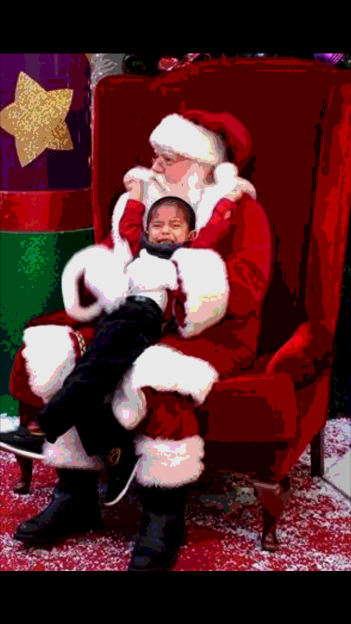 Today Santa, along with some of his helpers from the North Pole, took the day off to come visit us at our local mall.  It was a different kind of visit that Santa and his helpers are used to.  In other places Santa is welcomed by a storm of cheering children filled with hopes and excitement for the opportunity to sit in his lap sharing a little bit of their lives and hoping to influence Santa to get them those toys that they so much desire. Well not in this visit, things were going to be different and Santa knew exactly what was to come.

The folks of the organization, Caring Santa, partnered with Santa in order to have a photo shoot for children of disabilities.  Children with Autism, Down-syndrome, cerebral palsy, and many different other physical disabilities came by appointment to see Santa.  So there was no cheering or eager kids waiting in line to sit in Santa’s lap.  He was no celebrity today….no sir, today he was something else. Santa was a stranger, a kicking/scratching object, a punching bag if you will.  And well our Monkey was Santa’s first appointment and would leave a long lasting impression on him.  The monkey waited no time in letting Santa know that he did not like him.  He pulled his beard, scratched his neck, and even lunged at him when we wouldn’t let him go.  We were embarrassed and wanted to assist but Santa’s helpers were on the job and knew how to handle the situation. After many different shots the monkey was ok with sitting in Santa’s chair with Santa leaning from behind.  It was an amazing picture.

As we waited for our pictures and getting information from Santa’s helper, the following children followed in the monkey’s food steps with kicking, screaming, and scratching.  My wife thanked the helpers and told them how grateful we were for having this opportunity.   “We would not have come to see Santa knowing that the lines, crowd, noise, and all the other holiday commotion would mean a system overload for our monkey and probably the other children”.  Yet this opportunity allowed us to have a Santa picture with our monkey and give us the joy to share a Christmas card with our family and friends.  So yes we are extremely thankful to this organization, Santa, and his helpers. 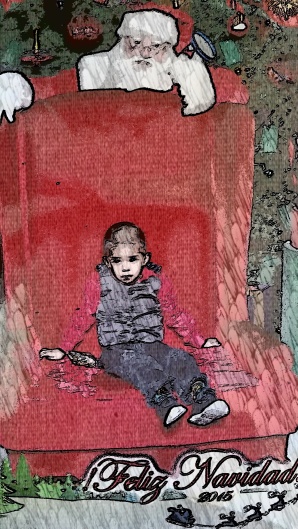