Yesterday was my monkey’s first dentist appointment. Actually his first one was when he was 6 months old. But I don’t think that one counts.

When the dentist asked us why it took us so long to make an appointment, my answer was simple.

I didn’t have the courage to bring him here.

Something I never needed with my daughter for something as simple as a dentist appointment.

I knew this appointment would be a very difficult process for my monkey. Due to his sensory issues, simply brushing his teeth at home is excruciating for him.  Imagine the feeling on having a stranger use different tools on your mouth?

We made an appointment with this specific pediatric dentist, a recommendation we received from our physical therapist. I purposely made the appointment when my husband would be home, due to his summer break. I knew I would need my husband’s strength, both physical and emotional.

When the doctor came in, she saw our faces, our worry. She took the time to calm us parents down.  She reassured us that she deals with kids all the time.  And yes also, kids like my son.  She was patient, and kind, and understanding.  She was a blessing.  She also had 7 assistants next to her, all of them waiting to assist in any way they were needed. Let me tell you, this dentist was prepared.

Then she showed my husband how to hold my monkey in a way that would let her examine his mouth.  That part was hard.  The fear in his eyes of the unknown.  The fear we saw in his eyes having strangers surround him.  The fear of unknown metal objects inside his mouth.  The screams for help. That was heartbreaking.  Courage.

Although it felt like a lifetime, the actual examination lasted about 10 minutes. Unfortunately his teeth aren’t that good.  He will need more work.  The dentist is going to coordinate with both our pediatrician and neurologist to complete all of the examinations he needs in the hospital.  The reason for this is to have him put under just once.  He is going to have about 5 procedures done that day. 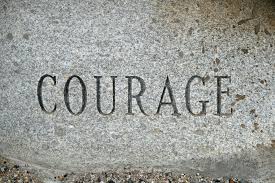