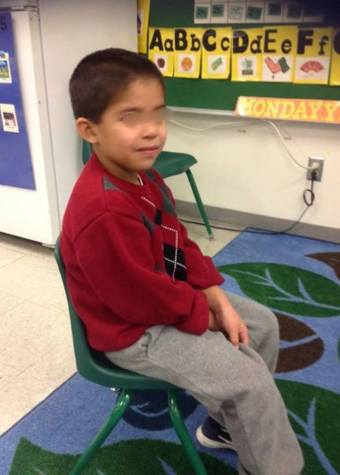 Update on the monkey’s school situation:
He went back to class, after our pediatrician and psychiatrist told us he needed consistency. When we went back to class, he did terrible. He cried and screamed and it was heartbreaking.
The assistance principal sat with us. She wanted us to go with her to her office to discuss our son. I told her we are not there to see her, we are there for my monkey.

Monday I got a call from the nurse. She was upset that my son kicked, scratched, and bit the principal while she was trying to intervene. She asked me if my son acts like this at home. I told her that no, he doesn’t. But his psychiatrists told us that he acts according to how his environment is. I told her that the reason why he is in defense mode is because he was physically assaulted by the teacher. She backed off after I laid it on her. I was very upset at her tone. But then she passed the phone to the principal and it was better.

Today is one week since he started school again. Yesterday he did better. He didn’t have a meltdown of any kind. Which is a huge relief. The note home from the long term sub was awesome. She was stating how much my monkey has improved, and she said all he needs is patience and love.

I filed a grievance to the district regarding the entire situation. The first level is to meet with the principal. I told the grievance department that my complaint was against the principal, & it makes no sense in meeting with her. But she said it was protocol. After much fussing, we will be meeting with the principal and the Asst Superintendent next week. Not sure exactly what will be accomplished but we will see.

The officer filed his investigation to the district attorney’s office. The DA’s office will prepare for the case and will present this to the grand jury. Depending on the verdict, that will depend if the teacher gets arrested, or if he goes back to class to teach

And this is the part that keeps me up at night. What will happen if he doesn’t get indicted? How can he go back to class? How is that even an option?

We are still trying to get the report from the first assault this man did. And we haven’t received anything. The status is ‘pending’, which is frustrating. It feels they are blocking us at every corner.

The principal called me last week to tell me she had arrived from her trip. We spoke for over 45 minutes. I told her that I blame this on her. It is her job to make sure these students are safe. If he did this one, well shame on him, but the second time, that’s on her. I told her she can’t be passing the buck. It stops at her. I told her I trusted her with my son, and she betrayed my trust. She cried over the phone. She said I was right on that. She said she can’t tell me anything because the investigation is still on-going. I told her, the only thing I hear, is that they are more worried about their liability, than my son’s safety.

But after all of this, my son is doing much better. He is sleeping thru the night. This is his third night of continuous sleep. Which is great for all of us.

I contacted the Disability Rights, Texas. It is an organization that specializes in the mistreatment of disabled people. Not sure what exactly that will help but right now, I think I’m just trying to grasp at anything.

This has been a terrible experience for all of us. And the guilt that I have is overwhelming. But I see the light now. I see that my son will prevail, and we will all be stronger. I know that he is only six, and has a long road ahead of him. But as of now, we are more empowered. I will continue fighting for my son.