I love being a dad. It has been the greatest role of my life. When our daughter was growing up, she is 19 now, she was introduced to in-line hockey and it became one of the best years of my life. We would spend countless hours together in the skating rink and I loved every minute of those years. We also did other sports like basketball, soccer, and wrestling as well. These were all sports that I grew up with.  And now, I was able to have that special bond with my daughter in the same sports that I grew up with.

When my little monkey was born (12 years apart from his sister), I was very excited to share the same experiences with him. I thought of the skates and hockey equipment that we were going to buy.  I also once bought a speed bag for him, so I could introduce boxing to him as soon as he could walk. Wrestling was my thing, so I imagined myself installing mats in the garage and start rolling around with him, so he could start getting a feel of the sport. This is every father’s dream, to teach and coach his kids, his son, and watching them become the vision of what we feel they should be.

When we first received the autism diagnosis, it became evident right away that our son would have special challenges.  And I won’t lie, it saddened me that maybe I would not have these same experiences as I did with my daughter. In one of our baby-showers, when we were pregnant, I was given a football that reads “first catch with my son”. That ball sits in my son’s bedroom, and my seven-year-old non-verbal monkey has absolutely no interest in it.

And although the sport experience is missing between my monkey and myself, my son has made me become a better father, because of his diagnosis.

You see being a father is not about me, or my wishes.  Being a father is about my children. It’s about them and watching them become the very best possible version of what they want to become. Autism comes in an enigmatic form that brings challenges that nobody prepared us for. The spectrum is so large that there cannot possibly be a standard in which our beautiful children can follow.  Because each child on the spectrum is their very own kind, with no comparisons.

Therefore, there cannot be a ‘standard autism dad’.

An autism dad comes with many mistakes and often one feels ineffectual. At the end of the day when I reflect on all that I could have done better, I remember that all those mistakes that I made were because I am trying to help him be the best version of himself. I am learning to be the dad that he needs me to be.  And because of those mistakes, I am becoming a better dad.

I love my little monkey and I would not change one single thing about him.

Everything that he is, is who I proudly call my son. 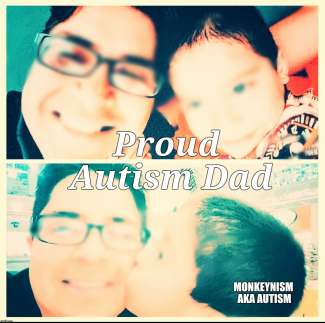